1) Put the data from "Phillips Curve Original Data" on the board or distribute on a handout. Ask the students to produce the original Phillips Curve from this data. Make sure students label the curve "PC," Phillips Curve, the X-axis, "unemployment rate," and Y-axis, "inflation rate."

2) Guide students and give feedback and reinforcement as they graph. A correctly drawn Phillips Curve looks like a "hockey stick" and slopes downward and to the right. Stress that a downward sloping curve is an inverse, or negative, relationship between inflation and unemployment. This means that as unemployment increases, inflation decreases. When students have completed their graph, show or distribute the transparency "Phillips Curve".

3) Discuss the data and graph. In your discussion, show that in the 1960s, inflation barely changed so workers began to expect inflation to be the same as last year. (Show or distribute the transparency, "Inflation Rate 1948-2004") As a result, they built these expectations into their wage bargaining process. Because of these inflationary expectations, a predictable relationship between inflation and unemployment became apparent. 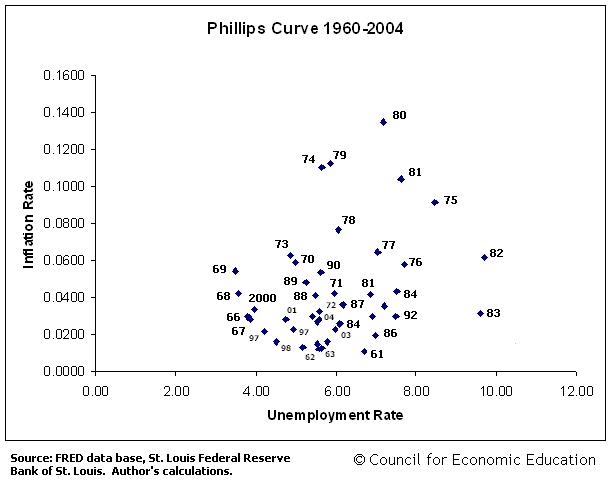 In 1974, the first of two supply shocks disrupted this stable relationship. As a result, firms had to raise their prices and inflation became persistent (look again at the Inflation Rate 1948-2004 transparency). Workers no longer formed their expectations on past inflation but on future expectations. This change in wage setting changed the relationship between inflation and unemployment. Examine the "Phillips Curve 1960-2004" graph to see the breakdown.

4) Examine how zero inflationary expectations lead to a trade-off between inflation and unemployment. This formula will help make the discussion clear. π = πe – .5(u – .05)

When u is less than the natural rate of 5 percent then inflation, π, is positive. This is the relationship in the 1960s. If policymakers wanted to tolerate a little inflation, they could legislate a 4 percent unemployment rate.

But workers changed the way they bargained for wages. They began to expect inflation. The Phillips Curve relationship became equation PC 2 as shown in the graph.

Ask students to research the Humphrey-Hawkins Full Employment Act. In this act legislators tried to maintain a 4 percent unemployment rate. What would be the predicted result of such a law?  Using the model, students should find a wage-price spiral.

At the time of the Humphrey-Hawkins Act, the natural rate of unemployment was around 4%. Changes in the composition of the labor force, sector shifts from manufacturing to services, and structural changes from technology have changed the natural rate over time. Show the transparency, "The Natural Rate of Unemployment" to illustrate how these changes have been made.

An interesting extension would be to see if the Phillips Curve shifted in the 1970s. Obtain data on the inflation and unemployment rate and graph. Does the new data lay to the right of the original? Most textbooks have this data. Industrious students will use the Bureau of Labor Statistics to obtain the data.

In 1964, taxes were decreased and inflation followed in the late 60s. Have students analyze fiscal policy and the effect on inflation.

Have students analyze fiscal policy and the effect on inflation. What other observable factors than a decrease in taxes may have fueled inflation?

Have your students complete this worksheet to assess their understanding of the Phillips Curve.

2. If the government tries to hold unemployment below its natural rate, workers will demand higher wages. Suppliers will respond by raising their prices. What is the name of this cycle? [Wage-Price Spiral.]

4. According to the Phillips Curve, inflation will not accelerate when the economy is at full employment. TRUE or FALSE (circle one). Explain your answer. [TRUE. Workers expect prices to be the same as last year. There is no price pressure because of increasing wages.]

It's All Elementary, Pt. 3: What Does Our Community Provide?

It's All Elementary, Pt. 1: Personal Finance in the Elementary Classroom