Was Babe Ruth Under Paid?

This lesson demonstrates a method for teaching students about inflation and the Consumer Price Index, using baseball players’ salaries for purposes of illustration. Babe Ruth’s salary from 1931 is adjusted to account for changes in the price level and is then compared to the salaries of those playing major league baseball players today.

In 1931, Babe Ruth made $80,000 per year. Was the Great Bambino overpaid or underpaid according to today’s standards? On average, Major League Baseball (MLB) players today earn $2,272,620 per year. This lesson will provide you with tools for answering this question. [Explain to the students that prices have also risen over this time period making this question more complicated than it appears.] Determine whether Babe Ruth was overpaid or underpaid in comparison to today’s MLB players. This question can be answered by using the Consumer Price Index (CPI) to adjust Ruth’s salary for changes in the price level.

The Consumer Price Index (CPI) can be used to compare dollar figures from different times accurately. The students may have heard their grandparents telling them that they remember when a gallon of gas cost a quarter or a loaf of bread cost a dime. But those numbers by themselves don’t tell us how expensive things were in the old days compared to now. It’s the same with salary figures from the past. For example in 1931 when Babe Ruth had a batting average of .373 with 46 home runs and 163 RBIs, an ice-cream cone cost five cents and going to a movie in a theater cost a quarter. Ruth’s salary then was $80,000 per year. But it is not clear from that salary figure alone whether Ruth enjoyed better or worse purchasing power than today’s players. 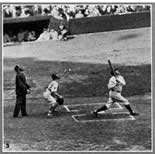 In order to investigate this question, a couple of concepts from economics must be introduced. First, the inflation rate: It is the percentage of increase in the price level of the economy as measured by the CPI. The CPI tracks the overall price change for a fixed basket of goods and services bought by a typical working-class urban family over time. It is a measure of price changes in consumer goods – also known as the “cost of living index.” The CPI “basket” contains goods and services that have been chosen for the CPI survey. Imagine a shopping basket loaded up with fruit, chocolate, meat, chips and other items from each of the nine groups of goods and services used in the CPI. The items in the basket must be identical in quantity and quality over a period of time. Some changes in prices may be due to increased quality or improved packaging, but these are not “pure” price changes. When this happens, price adjustments are made to remove the effect of these changes.

Given all of this, how do we actually make the comparison? Well, this is done using a simple formula as follows:

[Using data on the consumer price index from the web page above we can determine what Ruth’s constant dollar salary was as follows:

[Ruth’s salary in constant 2022 dollars was about $1.5 million per year. This is a little higher than the average baseball player makes today ($1.1 million in 2022), and much less than the stars make (Mike Trout of the L.A. Angles is the highest-paid MLB Player at $37 million per year). In 2022, Half of all MLB players made the same as or more than the great Babe Ruth.]

This lesson introduces the idea of inflation and the consumer price index. Students learn how to adjust dollar figures from previous times and compare them to dollar figures today by using a formula or by using the inflation calculator.

[Answers may vary slightly due to rounding.  These are also Oct 2022 inflation statistics.  If you are using this lesson after Oct 2022,  use the inflation calculator and change the answers.]

Use the inflation formula (not a calculator) to answer this question.