Traditional Economies and the Inuit

The Inuit people of northern Canada provide an example of a traditional economy. For thousands of years, Inuit parents have taught their children the survival skills needed to survive in the Arctic Circle’s severe climate. Students will research the Inuit economy and compare and contrast it with the United States’ market economy.

A traditional economy, an economy based on custom and tradition, may seem like something that is only read about in history books. To most of us, it just doesn't seem possible that rituals and habits developed generations ago, as well as customs that have been passed down for hundreds, if not thousands of years, could be the most important pieces of an economic system. However, there are still places in the world where a traditional economy guides the choices of children, adults, and elders as they make decisions as producers or consumers. The Inuit of northern Canada serve as a prime example of a traditional economy. For thousands of years, the Inuit parents have taught their children the survival skills needed to survive in the Arctic Circle's severe climate. The children are taught to fish, hunt, and make effective tools. Once learned, these skills are passed down to the next generation. 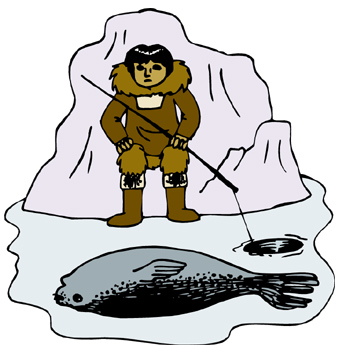 When the Inuit hunt, it is traditional for them to distribute the harvest with other families in the community. If a walrus or bear is harvested, hunters divide it evenly into as many pieces as there are heads of families in the hunting party. The hunter most responsible for the successful hunt has first choice, the second-most helpful hunter chooses next, and so on. Because of this custom of distribution, as long as skilled hunters live in the village, the Inuit survive the long, cold winters with the food and goods required to sustain themselves.

Unlike traditional economies, in a market economy individuals generate wealth by pursuing those activities that others value and are willing to pay for. Income earned is then used to buy the clothes, food, and other items needed, wanted or desired. People in market economies are seldom dependent on others as are the Inuits. However they are interdependent because they need others to provide the goods and services they themselves do not produce because of high opportunity costs.

Pique students' interest about traditional vs. market economies by asking them to answer the questions on the worksheet entitled, An Introduction to Traditional Economies. After students have completed this work, facilitate a class discussion in which students compare their thoughts.

Ask students to respond to the questions on the worksheet entitled: A Traditional Economy – What is it?

Ask students how far north in the world they have been? You might consider holding a contest in the class to see who has been furthest north.  Use this map to show the students where the Inuit live.

Ask students to describe the kinds of living conditions they think would exist in this region of the world. (Students should recognize that the region is very cold, has few inhabitants and roads are often not present.)

Explain that one of the few groups of people who live in this Arctic region are the Inuit. The Inuit continue to lead very traditional life-styles. They have sustained their culture for thousands of years, despite the harsh weather of the Arctic. They utilize a traditional economy in which they fish, hunt, and make primitive tools in order to get the food they need for survival. The spoils of any hunting are shared among the community. And they buy and sell very little, often only trading for basic necessities.

Ask students to complete the worksheet entitled, Learning About the Inuit.

Give student pairs a Venn Diagram to complete (or do one together as a class) that shows the similarities and differences between the traditional economy of the Inuit and the market economy of the United States.

To conclude the lesson, ask the students discuss their research and the information on their Venn Diagrams with their classmates. Use these questions to lead the discussion:

Now ask students to evaluate the traditional economy of the Inuit.

Finally, have students use all of the knowledge they have gained throughout this lesson to write an editorial, which offers their perspective on the Inuit and on traditional economies.

Students can research to find other modern-day examples of traditional economies.

Students can develop skits based on what they have learned about traditional or market economies. Have the class guess which type of economy the skit portrays.

Have students complete an exit slip that addresses the following big ideas:

The Essential Guide To Economics: K-6