This lesson utilizes the March 18, 2015, statement of the Federal Reserve's Federal Open Market Committee (FOMC) to explore the Federal Reserve's twin goals of price stability and full employment. This lesson discusses the difference in language between the most recent release and the one before, and examines the Fed's "dot plots" for clues about the timing of future rate hikes.

The Federal Open Market Committee (FOMC) of the Federal Reserve System (Fed) meets approximately every six weeks to decide on its use of the two policy tools at its disposal: setting the federal funds rate and engaging in open market operations. (Note: changing the reserve requirement is a rarely used third tool). The federal funds rate is the interest rate at which banks lend funds to other banks, using the Federal Reserve as an intermediary. Open market operations consist of buying and selling financial assets, changing the lending capacity of financial institutions.

The Fed instituted an asset buy-back program in 2008 in an effort to stimulate the economy (QE1). This program has been renewed (QE2 and QE3) until October of 2014. In addition, the FOMC has maintained the federal funds rate target at a range of 0 to 1/4 percent since its December 16, 2008 meeting.  The fed funds rate has been kept at this historically low level because of the low (or sometimes negative) growth rates of real GDP due to the lingering effects of the recession.

This lesson uses the March 18, 2015, statement of the FOMC to closely examine how the language in this current release is different than that of the release in January. Students will search for clues, both in the language of the release and in the Fed's "dot plot", for the timing of the rate hike, and what the Fed is looking for before their willingness to vote for a hike.

Consistent withBased on its previous statementcurrent assessment, the Committee judges that an increaseit can be patient in the target range forbeginning to normalize the federal funds rate remains unlikely at the April F.O.M.C. Meetingstance of monetary policy. The Committee anticipates that it will be appropriate to raise However, if incoming information indicates faster progress toward the Committee’s employment and inflation objectives than the Committee now expects, then increases inthe target range for the federal funds rate when it has seen further improvement in the labor market and is reasonably confident that inflation will move back to its 2 percent objective over the medium term. This change in the forward guidance does not indicate that the Committee has decided on the timing of the initial increase in the target range. are likely to occur sooner than currently anticipated. Conversely, if progress proves slower than expected, then increases in the target range are likely to occur later than currently anticipated.

Ask students what the major difference between the two statements is that shows up in the first sentence (they removed the word "patience", and stated that they would not be raising the rate at the April meeting). Many Fed watchers took the language in this portion of the statement to indicate that the Fed would also be unlikely to raise the rate at its June meeting as well. Ask students what about this statement would lead people to that conclusion (the Fed states that further improvement in the labor market is needed and they need evidence that inflation is really going to increase over the medium term, language that does not indicate they are in any hurry to raise the rates).

The dot plot for December of 2014 looked like this:

Ask students to look at 2016. Ask what the median prediction is for rates at the end of this year (2.5%). Ask what the high estimate is (4%). Ask what they notice about the spread of 2016's predictions compared to 2015's (it's more spread out than 2015). Ask them if they think that's unusual or to be expected (they should recognize that the further out in time people are making predictions, the more likely it is that the predictions will have a wider distribution. Although interestingly, the long term predictions are fairly narrowly distributed). 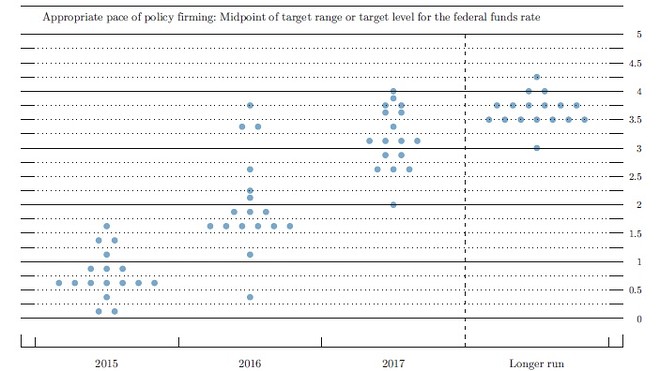 Ask what they notice about 2015's predictions (the median prediction is lower than it was in December 2014–about 0.6% compared to December's prediction of about 1%; 2 people still think the rate will stay the same; the high estimate is about 1.6%, offered by only one person; the distribution is tighter–not as much difference between members' predictions).

Looking at the dot plot, what conclusions can students draw about the speed at which the Fed is likely to increase rates? (the Fed is likely to take its time increasing rates). Ask students if the Fed's position is a dovish or hawkish stance (dovish, for the time being).

The Federal Reserve Open Market Committee (FOMC) meets approximately every six weeks to review the Federal Reserve's monetary policy positions. In this latest report, the FOMC notes that the labor market continues to improve. In addition, the FOMC believes that inflation is contained for the short term, but the factors keeping it in check are transitory.

This lesson dives deeper into the language the Fed uses to communicate its policies and intentions, comparing the last two reports. The Fed also releases its dot plots as a way to signal what individual members of the policy committee are thinking with respect to the appropriate level of rate increase and its timing.

In December, the Fed's prediction of the range of unemployment rate that would be consistent with stable inflation was 5.2 to 5.5 percent. In this latest release, they have revised downward that range to 5.0 to 5.2 percent. Ask students why they think they revised their estimate? (the current level of unemployment is 5.5 percent and inflation is not at their desired 2% level). Ask what evidence from the labor market they think would indicate to the Fed that the unemployment rate has reached a level that is consistent with a stable rate of inflation? (when wage rates start increasing significantly, that will indicate that most of the slack in the labor market is gone).

Lies My Econ Teacher Taught Me