Why do we need money? Think about Ebay!

The students investigate money–its purpose and functions. They complete an exercise, using the online acution site Ebay, to learn why money is critical to an economy.

This lesson explains why we need money in the economy. It shows how money functions as a “store of value,” enabling people to avoid the inefficiency of the barter system. Toward this end, the students will create an in-class market without money, using it to simulate a barter-only trading situation.

Show the students what sorts of things people may buy and sell on https://www.ebay.com/ and https://www.amazon.com/. Pick some good examples of goods that your students would have an interest in. Pick some that are inexpensive and others that are more expensive.

Have your students use the chart provided here to make a list of things they would like to sell on Ebay. Tell them to think about their room at home: Are there items in their closet that they never use? Have their parents been telling them to “get rid of that …”? 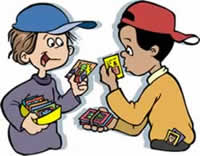 Next, have the students make a list of things they would like to buy on Ebay–using the proceeds from the sale of the items they have listed above.

Finally, setup a marketplace for these goods in your classroom. Tell the students there is no money in this economy. Have them cut out pictures of items from magazines and paste them onto the provided worksheet (or they may draw pictures of the items directly on the worksheet). Then they can cut out their items and use them for the activity.

Emphasize the point that in this activity everything must be purchased via barter and trade. The buyers and sellers will have to work out prices between them. For example, if one student wants a new video game that another student is selling, and the prospective buyer is offering old baseball cards, the prospective buyer and seller will have to decide how many cards must be exchanged for one video game.

Let the students participate in this market for 15-20 minutes and have them fill in this worksheet as they go along. After about 10 minutes, stop them and ask them how it’s going. Ask them if they have run into any difficulties with their transactions. After some discussion, allow them to continue for another 5-10 minutes; then have them go back to their desks. See how many transactions have occurred. Discuss the following with the students before going on:

Back in the real world, as people developed more and more goods and trade became more difficult, buyers and sellers began to use certain goods for money. If a trader could not find a good that he or she wanted personally, some good with market value could be accepted instead. Examples might be corn, salt (among the Romans), gold or wampum (polished strings of shells used in Colonial America). A doctor who is hungry might want to exchange his or her medical services to a farmer for food. But if the farmer is feeling fine and has no need for the doctor’s medical services, what would make that farmer want to give up his food? This is where money becomes useful. In the example of the doctor and farmer, the doctor could simply give the farmer money instead of medical services. The farmer would accept money more readily than the doctor’s services because money is always valuable.

In order to be useful, money must satisfy three important functions:

Ask the students whether their in-school market would be better if the buyers and sellers could use money in their transactions. Ask them to explain their answers. Would the market have been more efficient with money? Finally, discuss the history of money and the important characteristics that money must have to be useful.

In the earlier periods of history, families produced all they consumed and consumed all they produced. There was no need for money. But this changed once began to specialize. When some people became hunters and others became farmers, for example, they often made transactions by trading or bartering. This was relatively simple at first because the number of goods being traded was so limited. For instance, a farmer might want some meat for his family and a hunter might want vegetables for his family. The most logical means for both men to obtain what they want is to trade what they have. The hunter gives the farmer part of deer he just hunted and in return the farmer gives the hunter a basket full of vegetables. But the barter system has flaws.

Barter depends on a “double coincidence of wants.” It only works when one trader is willing to exchange his product for something the other trader has and the second trader wants what the first trader has. Use examples from your classroom exercise (perhaps one student could not buy the CD he wanted because the student with the CD did not want anything the first student had) to demonstrate this idea. The barter system can work when there are limited goods for sale; however, as economies developed and people had more goods to trade (ceramics, beads, arrows, bows, etc.), finding a good to trade became more difficult.

Barter also requires that an exchange rate be set. For example, how many hides must be exchanged for a bushel of wheat? Your students experienced this problem as well in their marketplace (how many CDs were required to trade for a new video game, etc.).

Money is important in an economy. Transactions for goods and services are very difficult to complete without money that serves as:

Have your students think about goods that are used as money today and goods that were used as money in the past. An example might be cigarettes in a prison (as illustrated in the movie “Shawshank Redemption”). Have the students study this chart  with different locations and the currency used.

Have your students explore this idea further by reading and writing a short report about the article titled “The Economic Organization of a P.O.W. Camp .”  Because this article is long and detailed, you may need to help your students by providing a short summary.

After the conclusion of the Ebay experiment, you could ask the students to write a brief report that answers the following questions:

AP Macroeconomic Series: Why Do We Need Other People’s Money? (Helping Students Master the For-Ex Market)